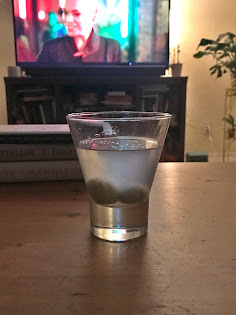 Ahhh. There it is. That’s my martini glass. THE martini glass. It’s a single solitary glass, not part of a set. I found it at a thrift store (SHOCKER) for less than a dollar, a few years back.

You all know me by now, so you are painfully aware that I put a lot of significance in random everyday objects. The bowl! A box of hodgepodge paperwork. An old alarm clock. What can I say? In this whackadoo brain of mine, pretty much everything has a degree of meaning and sometimes, a story.

Here’s the story of my martini glass.

Last year, my dad was dying. He was in hospice at his home, and despite a number of years of estrangement, I was welcomed back into the fold to help Dad get through his last task on this planet. I was honored- felt lucky to be there. And those 7 weeks were the hardest and best and saddest and most love-filled days I have been through.

And I doubt I would have made it through if it weren’t for my two besties. Cringe! Old lady using dated slang! LOL. But, my besties are truly that. My bitches, the three musketeers, whatever you want to call them…they’re the best. They know the absolute worst about me, and still want to hang out. They deal with my incessant texts about the asshole in my neighborhood who cannot stop blowing his leaves. They talk me off the ledge at least once a week. They trust me. I trust them.

So, these besties and I have a years and years-long tradition of reserving Friday nights for each other. For real, I’m sitting here trying to remember when Fridays became Homie Night but it’s just…always been?

To quote those feathered foxes of Loverboy on MTV circa 1981, Everybody’s Workin for the Weekend and our little cluster of three is no exception. Sometimes, the only thing that gets me through the week is that sparkly, twinkling, far-away glint called Friday Happy Hour. Whether we’re in my living room or in a cozy booth at Yard House, it is one of the highlights of the week.

So- back to hospice. Although I didn’t make every Happy Hour during those weeks, I did attend a couple. One night, about halfway through Dad’s ordeal, we decided to go to this amazing Thai place, Lemongrass. It’s been one of our favorites for ages because the food is SO GOOD. Seriously. Locals? They’re takeout only now but may I recommend the Pad Thai, the Lemongrass Special Fried Rice and the Wild Curry (with fried tofu OMG). Ha! It’s currently 6:30 a.m. and I’m longing for it.

Anyway. There is one thing I don’t like about Lemongrass: they don’t have proper martini glasses. Part of the Friday ritual, for me, is a dirty martini. Extra olives and if they have some blue cheese all up in them, even better. But please, for the purists, have a decent glass. The ones they use are those weird little bowl types, not sure what their official name is but they’re hard to drink out of and the aesthetics are just plain wrong.

That Friday, I was spent. Emotionally, physically, every-ally. And I wanted a martini out of a normal glass. So, I wrapped my beloved thrift store glass in some tissue and stuck it in a little gift bag (happy Friday from me to me lol). I’m sure it’s against rules and weird archaic Minnesota laws or something, but with everything else in my world doing a slo-mo crash and burn, all I wanted was a good filthy martini sipped out of a passable martini glass. I figured the worst they could say is “Nah”. And I’d still be shoving noodles in my face so that was an acceptable loss. I’m all about the risk-taking, you guys.

We were seated and were catching up with each other when the server approached our table. The other two gave their orders and then it was my turn. I pulled out the gift bag and withdrew the glass. “Okay” I began, “this is going to sound weird but I have a small favor to ask.” And as I quickly summed up, well, EVERYTHING I of course started to weep.

This is where many servers would likely roll their eyes or go on autopilot and start questioning their life choices. But our server…she also got misty eyed. She said, and I’m kind of spacing out what exactly took place, but something along the lines of “you can certainly pour your drink into that glass when nobody is looking”. She put her hand on my shoulder, not in a creepy no-boundaries way but in a kind, loving manner.

And that’s what I did. Super stealthily, I’m sure. But it did happen and out of all the shit that went down during those agonizing weeks, this memory stands out.

Oh, and that server? She also insisted on buying the martini for me. Yes, I cried some more. The tears are always on call, people. Always ready!

One thing I’m learning in therapy is how our brains work. Mine, in particular, works differently than most due to the stacks of trauma that are stored in there. I’d like to think that even without having gone through what I’ve gone through, my brain would still be a little quirky. A bit unconventional.

Attaching emotion and memories to just about every object in one’s life is surely the basis for every episode of Hoarders but I think it’s also a way for people like me to remember when life didn’t hurt. When something as innocuous as a heavy secondhand glass holds not only my beloved cocktail but also a reminder of the kindness that exists in this volatile world.

PS yes that’s the fabulous Hannah Waddingham in Ted Lasso on the television. I’m rewatching it. We’ll chat about that later.