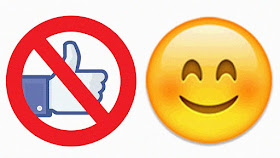 Come sit next to me, little ones, while I regale you with the tale of Facebook.

Oh! The days of yore when it was a seemingly benign place for people to gather. We tended our make-believe farms, posted lengthy "10 Things You Probably Didn't Know About Me" notes, friended that guy we drank chocolate milk with in kindergarten and answered promptly when Facebook asked us what's on your mind? even if what was on our mind was something as banal as how tired/hungry we were or "watching CSI".

My babies, it was FUN. It was bonding and millions of us reconnected with long-ago friends, shared pics and updates with Aunts and Uncles and followed our favorite celebs. Personally, it helped me through the dark post-divorce times. As cringey as my vintage status updates are, reading them now is a not-so-gentle reminder of the hell that my life was for a long time and how much love friends gave.

Facebook grew. And like a baby who once elicited gentle oohs and ahhs, it became a tantrum-prone toddler: still cute but my gosh super annoying at times. The toddler stage came and went, and we hung on for the ride. It became less about staying in touch with everyone and more about taking stances, advertising and living that Fakebook life. We joked and collectively yiked when our conversations off of the internet spurred suggestions and ads about the very things we had mentioned in supposed-privacy.

Facebook became less fun and more stressful. At least, that's how it was for me.

It was also addicting. It was often the very first app I checked in the mornings, and it wasn't uncommon for scarily large chunks of time to slip away while I scrolled, commented and liked. It was almost ritualistic, the initial check of notifications, answering (or sometimes not answering, lol) the messages, checking up on people we were worried about or crushing on or disagreeing with. I found myself turning to Facebook when I was feeling cagey or ragey or bitchy.

Do you remember the first time someone you thought you knew, someone you thought you liked unconditionally, posted something that shocked you? I'm not talking about someone who admitted they loved Hallmark Christmas movies or preferred black licorice over red. I mean something that at the time seemed uncharacteristic, like another personality had taken over their profile.

I'm trying to recall the first time I did one of those cartoon gasps, when a "friend" publicized something that took me by surprise. I can't think of the original OMG moment but whoa- there were many more to follow.

Politics. It started with the politics, naturally. It was one thing when someone declared their hatred for the Green Bay Packers, something entirely different when that ire was directed at a group of people based on their political leanings. And when it turned towards race/religion? Ugh.

We learned how to unfollow, how to mute chats, how to block and sometimes, how to unfriend. I have always prided myself on being Little Miss Sunshine, the uniter, the glass-half-full person. Switzerland! Why can't we all just get along? But it became increasingly harder to be that person. I found myself fighting with friends and strangers, pretending to be a hardass when inside I'm the softest ass you'll ever meet.

I was judged, and I judged right back. Facebook became a boxing ring instead of the inviting front porch it had always been.

There was still fun to be had, though. I started a private group, The Porch, which quickly filled up with fellow divorce survivors and supporters (hey porchers!!! I miss you all!!). The public Happy Hausfrau page was a little oasis from the pettish din. I started a weekly Meme Roundup and Friday mornings quickly became my favorites as I posted meme after meme. People commented and liked and shared and we LOLOLOLed together and it was a blast.

When clicking on that innocent little blue and white icon filled me with trepidation over what I'd find in the notifications rather than that old timey excitement, I knew a choice had to be made. And it wasn't because I wanted to bury my head in the sand and pretend that life is a gd walk in the park. It was self-protection.

Some of us are able to scroll past the stinky stuff. To ignore the baiting and the lying and the downright awfulness. I'm not one of those people. I'm a sponge, you guys. Whatever I'm around gets soaked up, absorbed. Both good and bad. It's not the worst trait but it's a doozy. Especially when our world is such a raging cluster of vein-popping scream-fests and hills that are so NOT worth dying on.

And so, a day after my birthday, I removed the app from my phone. Yes I'm laughing about how dumb that sounds but it was harder than you might think. The worst of it was my writing stuff. Even though writing has become more of "used to" thing with me, it was good to be in touch with fellow bloggers and editors and fans. I've been threatening to write a book for what feels like centuries now, and it sucks that unless you have a preformed fan-base, an influential platform, you are almost certainly doomed to fail. For that reason I didn't delete my pages. (okay also because it's a hell of a time capsule, right?)

Breaking up with Facebook was easier than I thought it would be. Also harder in ways I hadn't anticipated. I worry that people who only knew me through that particular realm would think I just fell off the face of the earth or worse, cut ties. The temptation to log back in has been real. But I've resisted. My rebounds have been twitter and Instagram. Twitter for the bitchy days and Instagram for the warm fuzzy ones.

Some days, I miss it. But in this case, absence isn't making the heart grow fonder. It's making my heart happier.

Maybe, juuuust maybe, after the election and if we get a handle on the 'rona, I'll check back in. I'm sure my beloved aunt has tagged me in countless wine memes, Scary Mommy comment sections are still rife with combat and high school friends are still posting scary/hilarious conspiracy theories. That FOMO feeling is fading with each passing day, though. It's refreshing to not have that weird compulsion to check in on the Facebook and see what's happening.

It's also really nice to be back here again ❤