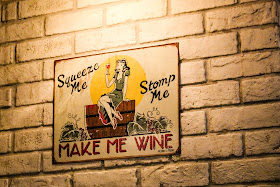 You know how it goes, after a night of grief-wining, you check to make sure you didn't leave any messes...physical and/or otherwise.

Texts: all good, no regrets there!

Kitchen: as clean as it gets, LOL.

Blog: Ahh. There it is. My first post in eons and it was the love child of chilled rose and the always-fun Saturday night sobs.

I mean, I've posted worse completely sober so I'll let it stay but I do have to offer apologies for several things: my redundant use of the phrase "here we are", for one. And a huge apology for any visuals you may have had when I mentioned a sex dream about Tucker Carlson. I'm not proud of that one.

I guess I should explain the politics thing a little better, now that I am upright, fed and able to string a few words together coherently.

Obviously I am still your favorite bleeding heart liberal divorced mommy blogger. I hope so, anyway. If anything about me has stayed the same, it's that I am unashamed to express my support for all things left-leaning. We've discussed it here before, I think, and we've all remained buddies (again, I hope so).

It's been argued that we, as liberals, should cut out any and all relationships with people who are trump supporters. I'm no longer on Facebook but it wasn't uncommon to read that someone had disowned family members because of who they voted for. I don't remember it being that way prior to 2016, at least in the bubble I live in currently. Friends and family didn't like Obama but aside from one particularly loathsome high school acquaintance I don't recall a whole lot of animosity. And from the racist assholes but those types are always around no matter who is running the country. They just had a much bigger target with Obama.

Trump has changed all of that. I'm not gonna get into the pointing of fingers over who has been the loudest and most divisive, but I will say that it still blows my mind that we're here in 2020. I find him to be a bad person and in general I don't like bad people. For me it was all the cheating he did on all of his wives. That was bad enough for me, let's not even start with allll the other stuff.

So it turns out my dad is not in the same political boat as me. I've spent days and nights at my dad's house and he watches Fox News. At first I was afraid. I was petrified. Oh wait that was Gloria Gaynor. Anyway. I really was uncomfortable hearing that in the background 24/7 but guess what: my dad is literally on his deathbed. If you think I'm going to try and get him all woke before he goes, nope. I disagree with all of it, every last bit of this current administration and their policies and all of the garbage they spew out by the second but I will not go down that road with my dad. I can and I will love him, love my new/old family and hope that they love me back despite our differing beliefs.

I will say this: holy propaganda. It's not a stretch to see how people have been brainwashed by this "news" outlet. Every single issue is BREAKING NEWS and ALERT!!! and nothing but high praise for 45 and his cronies. It's easy to see how people get sucked into it and start believing it. Raise your hand if you've ever considered buying something simply based on an advertisement...let's be real you most likely haven't pondered purchasing a Klan hat or a story about a wealthy guy in California dropping off not one but three macbook pros to a monocle-wearing computer repair guy in Delaware but still. It's marketing, baby, and sometimes it works.

Trump has destroyed so much. I can't let him destroy what's left of my time with dad.

Some clarification re: Tucker Carlson. So one night, we were all gathered in the living room where dad's hospital bed is set up. Fox News was on, and it happened to be Tucker's turn on the mic. Because I am me I said, "You know, he's not super awful looking. I mean, if you're into that kind of thing." And a Tucker conversation began. Henry, my 23 year old, mentioned that one of his friends went to school in DC and would see Tucker out and about sometimes. "He's short and round, ma. Not your type." (gosh I love my kids 😂). This led to an intense Google search to find out more about this thin-lipped talking head. We found out he is a trust fund baby, married to a walking J Crew ad and the father to four astoundingly good looking children.

My taste in men is legendarily awful. Not every time, but the majority of it for sure. I like 'em tall and funny and for some reason, Republican. It's not like that's what I seek, because if you know me I'm not out there seeking. It's what falls into my lap on occasion. I pictured Tucker Carlson, with floppy hair and a bow tie, on a taller, more athletic frame and I guess one of the exhausted neurons in my brain sent it down to the dream factory because there I was a few hours later, engaged in lustful acts with him. Hey, it's been a doozy of a few weeks, friends. I'm not myself. Or am I?

There ya go. Some explanation for a sloppy return to blogging. Thank you for being here. I promise to do more writing and less tippling in the future ❤