The Tears of a (white) Clown 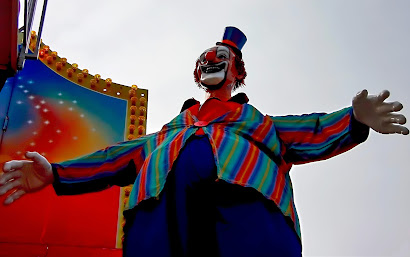 Wow. So the last time we chatted, I had run into a colleague from the past who nudged me about this blog. About writing in general. As we parted ways I had a spring in my step, a fire in my belly, a bag of poop in my hand...dog poop, remember I was walking Walter.

And you guys, I did feel inspired. That old tickle came back, the one that I imagine is caused by the words and the stories that are dying to get out of my head. "Dammit" I thought to myself. "I do want to get back at it. Okay, let's do this."

I had a draft or two started, and was gearing up to go full blown blogger again, when tragedy struck.

He was murdered about 8 miles from the very spot where I sit here with the ancient laptop and play writer. Eight miles. The outrage and the grief turned Minneapolis into a burning epicenter of protests, demonstrations and yep, riots.

I closed the laptop because at that chunk of time, the last thing anyone wanted to hear was a middle aged white woman babbling on about tv shows and quarantine weight.

George has been laid to rest, his killer(s) are in custody. Racism is still going strong but I am hopeful that some eyes have been opened, including mine. A lot of us white people think we're pretty freaking woke but I'll tell ya what: we're still snoozing, my friends. There is a lot to do, so much to learn and omg so much to unlearn.

I had a little wake up call when I posted something on this blog's Facebook page. Every Friday I post a meme roundup. At this point I don't remember how it started but honestly it was the only real way I had to mark time during the quarantine for a while. "Oh shit it's Friday isn't it? I have to do the memes." I was like the Dunkin' Donuts guy from the old timey commercials except instead of "time to make the donuts" it was "time to post the memes".

Anyway. So obviously it wasn't the right time to post memes, you know? Instead I posted a pic of Minneapolis in flames and said something like "no memes today, our city is burning". Well. A follower on the page, who happened to be a Black woman, called me out. And did so with great gusto and ferocity. Her grief and her rage were tangible in her words as she took my ass to task for not addressing WHY the city was on fire. She let me have it and I was defensive, so defensive. I think I swore at her in my reply. I cried- tears of a white clown. Because SHE WAS RIGHT. I sat with her scathing criticism for a bit and let it sink in. SHE WAS RIGHT. Why didn't I say why Minneapolis looked like Dante's Inferno? Why didn't I use my platform, my admittedly tiny platform, to call attention to the atrocity that had taken place 8 miles from where my big ass sits and scrolls through the Netflix menu and where I complain about the toxic farts my ancient dog lets rip 24/7?

I'll tell you why: because I was, and honestly still am, scared. Scared to rock the boat, scared to speak up, scared to stir the pot, scared to offend people. Chicken. Cowardly.

If you've been here for a while, you know this about me: I'm a people pleaser. I'm Switzerland, I'm the one who likes to smooth feathers, not ruffle them up. Okay, yeah, I've given my ex and his lady friend some shit, along with a few unfortunate dudes. But in general? My Minnesota Nice is almost as thick as my Minnesota accent.

I joke about it, about the Lutheran Libra who will say something funny and then offer up a drink or snack. The one who tries to diffuse tension vs acknowledging the bleeding and screaming elephant in the room. We can blame my upbringing for this, we can blame centuries of white DNA, we can blame it on the rain.

That woman, the one who let me have it on Facebook? I reached out to her, privately, and apologized. And thanked her, profusely, for taking the time to school me. In the middle of one of the most important civil rights movements in our history, she stopped grieving and fighting and tried to pry open my stupid eyes. I think we ended on good terms. I sure hope we did.

And so, now you know why I didn't check back in here for a while. It was learning time. And it will be, for a lot longer.

Don't worry, if things work out and that tickle is still tickling and the laptop holds up and I keep running into Ellen, there will be more action on this page. I'll still talk about life after divorce and what it's like to be alone during a fucking pandemic (oh yes we are so totally going to talk about the "hahah omg i want to smother my husband" stuff, I promise). We will talk about how I'm pre-mourning the loss of my beloved dog and how my unemployment hasn't kicked in yet (no paycheck since June...oh honey we will totes talk about that). For sure we'll talk about my angel landlord, the 12 pounds I've gained and what skills I hope to hone before the Civil War starts. I'd love to talk about the anxiety I have about my orchids. And how my friends and I have become Poshmark obsessed (and maybe how it kept a roof over my head this summer). Ooh and we can talk about kids growing up and being ADULTS and tv shows and how much I miss going to movies.

But we're also gonna talk about Black lives. About how they matter and about the racism we white people have to drag out into the daylight and stomp to death.

I owe it to that beautiful woman who kicked my ass, virtually. I owe it to the Black people I know and love. I owe. And so that's where we're at here on this dusty old blog.

I also really can't stand trump. But we can talk about that later, too. 😉