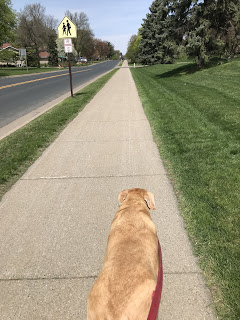 A few days ago, I was out on my daily quarantine walk with Walter. Back in the PC days (pre Covid, ya know), I used to feel anxious when the tiny outline of an oncoming person would appear on the horizon. The whole eye-contact thing: do I look them in the eye as we approach each other? no that's fucking creepy, Jenny. A small sideways glance as we pass? Ugh. LOOK DOWN. No that's rude. By the time the person was actually within eye-contact distance I'd already worked myself into a small, silent frenzy and would usually end up giving them that weird muppet mouth grimace/smile.

Ahh. But these are the Covid days. The anxiousness is now a constant sidekick, the moment we step foot off our driveway and onto the gray cement sidewalk. Because now I worry about so much more than eye contact. jesus they're awfully close, neither of us are masked up oh my gawd JUMP and off I go into a tangle of tall weeds or into the bike lane (usually with the muppet grimace, some things haven't changed).

So this particular day, we were about a third of the way through our walk- half a mile from home. I saw another person and did the sane thing which that day was cross the street. I find it easier to do than leaping into thickets. As this person drew nearer, I realized it was someone I knew. Or rather, someone I used to know. A million years ago I worked in the cosmetic department of Dayton's in downtown Minneapolis. This was the early 90's, before I was married and when I still believed babies were abhorrent, noisy nightmares contained in ankle-cracking strollers.

We had a fun crew there at the ol' Prescriptives counter. There were four of us: me, the 20-something party girl; Kim, another 20-something but with a live-in boyfriend and more sense; April, yet another 20-something who modeled and dated older, wealthy men; and Ellen. Ellen was our resident makeup artist and unbeknownst to her, one of the wisest people I'd ever met. She was willowy, with a gorgeous thick, stick-straight shock of black hair that was streaked with silver. I remember so much about her, from the way she'd stand there, one hip leaning against the counter, arms folded with one slender hand curled under her chin, to the hypnotically rhythmic way she'd smash up the pigments we used to custom blend powder.

Ellen was married, with two young children. I'm sure she listened to the rest of us, with our tender Gen X tales of woe and joy, and internally shake her head. She dispensed wisdom, but not in a condescending, wise-old-owl way. No, her nuggets of worldly enlightenment often came at us stealthily, buried in the layers of small talk that we makeup ladies partook in during the slow moments of the day.

There was the time one of the girls from the Origins counter was fired after only two week's employment. Ellen and I were working, and as we observed the unfortunate employee being given the bad news (the cosmetics department was a cold place), Ellen leaned her hip against the counter and sighed, "Some people are just too soft for this world." Those words would pop into my head for years, in fact they still do. Oftentimes they pop into my head when I find myself crying over something like baby geese or the thought of my dog dying and I think well I'll be damned! Ellen was right, some of us really are too soft for this awful world.

My time at the counter ended when my whirlwind relationship with Big Daddy got serious and we decided to move to the suburbs, together. I traded the makeup brushes for a folding board at The Gap, inside a bland mall across the street from our new apartment. After we had one kid and were expecting a second, we moved into my old childhood house that my dad still owned. Rented at first and then bought it from him. It was in a charming postwar neighborhood, and one night as we were pushing little Charlie around in our very own ankle-cracking stroller, I saw Ellen standing out in a yard. Yes, we were neighbors around-the-block, and after we caught up we'd say "hi" now and then but never much more than that. She was busy with her pre-teen kids and I, of course, was afloat in a sea of babies and toddlers and preschoolers.

After all the shit hit the fan with my marriage, and especially after losing that damn house, I never really saw Ellen anymore.

As Walter and I made our way up Glenwood Avenue, there was Ellen, making her way down. In the days of old, I most likely would have not even noticed it was her, what with the cuckoo inner monologue and all. But these are different days. These are the Covid days and I miss talking to people so damn much that I manage eye contact sometimes and that day I was feeling positive and kind of happy so as we passed on opposite sides of the street I exclaimed, "ELLEN!". She looked over, and I thumped my chest like mother effing Tarzan and said "Jenny!" (yes I'm laughing too because could I be any more awkward?). She smiled and we stood there, on our respective sides of the road and caught up a tiny bit.

Her gorgeous hair was still thick and straight but now it was completely silver, with a swoop of lavender. Other than that, she was the same. The same as she had been almost 30 years ago, one hip on the counter and her elegant hand perched under her chin.

Before we parted she said one more thing, and over the past few days I've come to realize that she is still a dispenser of wisdom, even in a setting as casual as a mid-morning sidewalk encounter.

"I really enjoy reading your blog."

Now, this isn't the first time someone has brought up this blog, or my writing, in casual conversation. It happens now and then. Not as frequently as it did when I was, you know, actually WRITING, but it does come up. My reactions vary a bit but are usually along the lines of "oh that old thing? I never write anymore. I should do that more often..." And then life goes on and I shove all thoughts of blogging and writing back into the dark dank corner of my heart where they've lived for a while now.

But something different happened when Ellen said those words to me. I don't know what it was, if it was her voice, or just that momentary clutch of time and air and sidewalk and plague or what...but something different happened. Oh, yes, of course I still mumbled something about "oh yikes yeah I haven't written there in ages" but more than that. Her words stuck, just like they did decades ago in that long-gone department store. This time it wasn't me, half listening while thinking about what I was going to wear to the bars that night, this time is was me, struggling to feel something...anything, out for a walk with my geriatric dog.

Ellen's words reminded me that once upon a time, I wrote. And that I loved doing it.

And so, reader(s?), here we are. That little sentence spoken by a long-ago colleague was the nudge I needed to do this.

You'd think two and half months of quarantine would have been enough of a nudge, huh? Turns out I just needed to hear someone say it.

So. Thank you, Ellen. For everything.

Buckle up, friends. We have a lot of catching up to do.