So much for meh.

In the wise and blunt words of my friend and fellow divorce writer, Chump Lady, the mecca for all of us who have been through the nightmare of infidelity is called "MEH". It's the magical land of not giving a shit. The place where we really need to be, after enduring the psychological warfare and injurious degradation of being cheated on, lied to, and for some of us, left.

It's the place we really need to be after having our lives not only turned upside down, but also turned inside out and set on fire and then left to burn while the ones who did the turning and burning walk away, unscathed and unbothered.

I've been there! I swear! In fact, probably 89% of my time is spent in Meh. It's lovely. All of my friends live there and yes, the grass really is greener.

Sometimes, though, I take a wrong turn and find myself standing on the outskirts of town. On the other side of the tracks. In that painful place where past indignities have left muddy ruts in the road.

Thankfully my trips to that land are few and far between. And when I do slip up and go there, my heart and what's left of my brain know exactly how to put it in reverse and get the hell out.

But not before I take a look around. Breathe in that old air and the old smells. No matter how long between visits, it all comes rushing back.

I left MEH for a bit. On Christmas, of all days.

I know, I know. "Come on Jenny! Seriously? GET OVER IT." I hear ya, and if it's any consolation the one screaming those words the loudest is me. Every single time I feel the tug of the old anger, of the resentment and the pain, I put those words on autoplay and try my damnedest to heed them.

Count your blessings. Be glad you're free. He did you a favor. Look at your kids. Pet your dog.

All of these things. They're the truth, and my rational self knows that. But there's another part of me that can't help but go back every now and then. Despite the healing, despite the love, despite the growth and the time spent in Meh, part of me shrugs off the hands holding me in this good and peaceful place and heads back down that dark lane.

It looked as though I'd avoid it this time, at first. The kids and I had a glorious and quiet and calm Christmas Eve and Christmas morning. I had a surprise visit from the Barf Fairy on Saturday...no huge surprise since I work in a school where she practically has an office, but still. Gross. According to my Fitbit, I was for all intents and purposes dead on that Saturday before Christmas. Eighteen hours spent prone and lifeless, the other six spent either running to the bathroom or hunched over the commode, trying really hard to not pee my pants while barfing and just between you and me, failing spectacularly (cleaning up after a kid with the pukes is bad enough, let's not discuss cleaning up after a middle aged lady who has had four giant fetuses tap-dancing on her pelvic floor, mmkay?).

As is tradition, there were no real solid plans made between the children (okay, the young adults who are my kids) and their father. He and the missus were having a holiday open house, which I guess is something you do when you're still getting situated in your million dollar house. Easy now, girl. Steady.

Anyhoo. Where was I? Ah...yes. The kids took a vote and decided to head over mid-afternoon. We'd had our Christmas: presents were opened, ham and roadside potatoes prepared and consumed, many laughs were had. When they bundled up and headed out into the frigid winter's day, that little nudging thing happened, the whispered utterance that I can barely hear these days: there they go. this isn't normal. this isn't what was supposed to be. Listen, as far as the voices go, that one is easy to blow off. An empty house is something I rarely get these days, and so I relish it when it happens. Of course, I didn't do anything wild or crazy, in fact I ended up sitting there eating candy canes and watching The Santa Clause. Seriously. BUT THE HOUSE WAS EMPTY WHILE I DID IT. Also, Tim Allen has always given me the creeps. Anyone else?

The offspring returned approximately one hour later. This reminded me of the olden days when they'd leave with him and not return for a whole day. Or two! Now that was an empty house I most certainly did not relish, friends. Oh, it was okay at first. Kind of how I imagine solitary confinement would be nice for a few hours. But when you've lived with a home filled to the brim with noise and activity and the relative chaos that comes with four growing human beings, their absence is a huge and unnatural void. A void you eventually come to peace with, for the sake of sanity, but a void nonetheless.

One of the advantages of kids growing up is that they begin to call some of their shots, and one shot my kids have claimed is their time with Dad is limited. Not out of malice or dislike, I don't think. It's more a matter of putting in their time with a person who only makes so much time for them. You get what you give, people. It's taken me half a century to figure that one out and seeing it manifest in front of you is a sobering display. You get what you give.

They piled in the front door, cheeks red, hands clutching packs of socks from Costco and Amazon gift cards. One of them also carried a plastic container. The one holding this vessel plopped it down on the hutch in the living room and said, "Here's some Christmas cookies they sent with us."

Now, when I do leave Meh it's usually triggered by something. It's never spontaneous. I can tell you it never happens while I'm out with my lady friends or reading a book or sitting in the office at work. No, it's always brought on by something, big or small, that for some reason opens up the portal and sends me slip-slidin' away.

Look. I don't even know who made the freaking things. All I know is that they showed up, in my little ramshackle rented home, direct from the formidable manse where the father of my kids now dwells. They were innocuous enough, in the blue-lidded Glad container. They meant no harm, I told myself. In fact, maybe it was a sign of humanness, glad tidings and good cheer and all that festive jazz.

But damn. As I cleaned up the remnants of our celebration; flattened boxes (putting them away to keep for next year because I will not be sitting there at 2:15 a.m. next Christmas Eve turning a tampon box inside out, dammit), putting gifts in separate piles under the tree...my gaze would settle on that container.

How nice. I thought to myself, how nice of them to send some cookies. And then I thought how nice it must be to pack a doggie bag for your kids in your beautiful huge kitchen of your stunning new house and send them back home. This is when I also thought jesus christ Jenny. Stop. THEY'RE JUST COOKIES, NOT A GAUNTLET.

This is where I leave you, Meh. This is where I bid adieu to rationale and sense and sanity and get swallowed up in the gaping, dripping black maw of everything that is opposite of Meh.

Those cookies were a middle finger flipped right up at me, a defiant eff you from both of them, the man who changed the course of my life and the woman who held the wheel while he did it. The anger I've held back since learning of their sudden prosperity, just a few months before our youngest kid turns 18, bore first one small hole and then another and another in the dam I've worked so hard to build and maintain. I dubbed those cookies "hookies" for a few less-than-mature reasons and despite hating that immature, bitchy junior high girl who resides in my heart, I laughed a little.

I thought of what it must feel like to close on a house worth more than I will make in thirty years, thought of what a sense of stability and security must feel like. Thought of how my dear sweet landlord informed me that he and his wife will be selling this house, our house, our safety net, our home, in the next few years and how every single day, every hour of every day since he told me that I've grieved and mentally prepared myself and in my more delusional moments, fantasized about somehow buying it from them and never having to leave. Never having to uproot again, never having to explain my shitty credit or lack of savings or just how I ended up here to anyone, ever again.

Yes. All of this from cookies, folks. My mind is a many-leveled place, most of it considered "unfinished basement".

So I thought all of that and then I opened up the box and plucked out a cookie, the kind where a mini Reese's peanut butter cup is nested in a crystal-sugared dough. I ate it because it felt like a less defiant middle bird back at them and also because I am powerless over food, especially when my brain is doing an Elaine Benes dance of rehashing the past and stoking the coals of angst.

The cookie tasted like nothing. It was pretty, cookbook-perfect, but had no taste. Like an old timey Christmas window display, it was lovely to look at but empty inside.

I felt the reins loosen. My thoughts stopped churning. I felt the axis of my world reset, head back to Meh.

I picked up the hookies and I dumped them in the garbage. Not to worry, with the full go-ahead from the kids. Thanks to friends and coworkers, we are well-stocked with cookies that taste good. That taste like love. Life is too short to eat bland stuff. Make it count. Make it worth every bite. 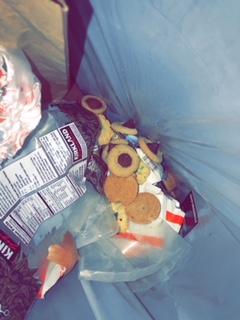 Later that night, I took a picture of the trash can contents and showed them to a far away friend, a comrade in the divorce world. I asked if it was petty, and she said no. She said, and I quote, "Good for you."

Sometimes the detours take us to ugly places. Thankfully, we make it back.

I hope your holiday, if you partake in holidays, was a good one. If not, I hope today finds you at peace.